Although the name says Charles Daly, this is really a Zastava M70 rifle at the heart. The Zastava brand has been gaining in strength in North America to the point where they no longer need to white label their products with brands like Remington, Century International Arms, or Charles Daly, because the Zastava brand stands on its own. This particular Charles Daly comes from a time when Zastava didn’t quite have as strong a brand name in N. America and was really reasonably priced due to the obscurity of Charles Daly rifles. Behind the name is a solid Mauser action made by a company with roots back to 1853 that has been making Mausers since 1924.

Overall, this is a commercial Mauser with hinged floorplate, side safety, and a Ram-Line synthetic stock. Drilled and tapped for scope bases and without any kind of iron sights, it is built for scope use only. For a pure hunting rifle, I think that’s fine as modern scopes are reliable enough to depend on for hunting anything in North America. With a synthetic stock, bases, but no scope or rings, this package weighs in at 7 lbs 3 oz (3.26kg).

As of this writing, Zastava offers their M70 Sporting rifle in the following configurations:

Controlled Round Feed vs Push Feed

Most hunting rifles these days are of push feed style. Push feed rifles “pop” rounds out of the magazine, push them into position and the extractor clicks over edge of the rim of the cartridge as the cartridge chambers. On a controlled feed rifle like this Zastava, the rim of the cartridge rides up and into position with the extractor as the round slides out of the magazine. With a controlled feed, you can use a strong extractor design and get slightly better feed reliability when firing from strange positions where a push feed style bolt may drop or jostle a cartridge out of position. Personally, I don’t think the differences are worth worrying about. Unless you’re doing some sort of ninja-hunting and firing upside-down, a push-feed style will be just as reliable for 99% of hunting circumstances and will probably cost less.

Machining on this rifle is rough, but usable. Bolt slide back and forth is a bit tight and catchy and bolt turn-in was tight, but these things should smooth out with time. The bolt track on the receiver as well as the feed ramp were very roughly finished but that didn’t seem to make a difference for reliability. If anything the rough machining sure holds oil well! 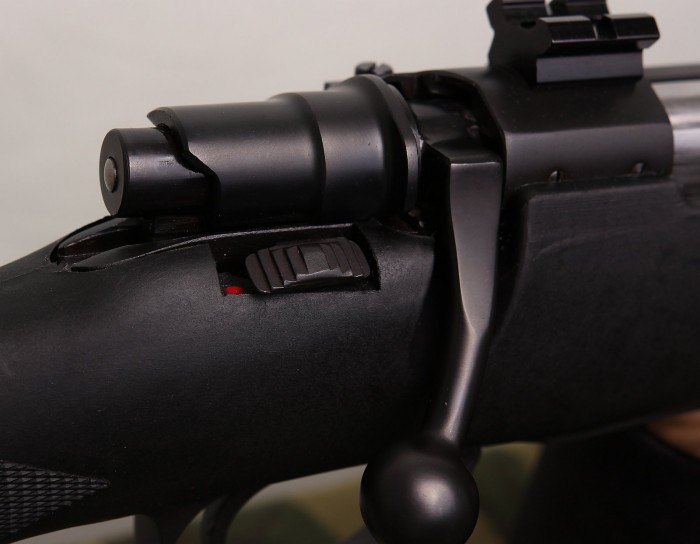 The original Mauser 98 comes with an odd 3 position safety at the rear of the bolt. Thankfully, Zastava chose to go with a nice sliding style safety just to the right of the rear of the bolt. It’s incredibly quiet, though a bit too easy to move. It’s light enough that it may be unknowingly jostled to fire mode when carried. I really like the fixed ejector, as it makes it easy to moderate how far you want brass thrown. At the range, you can ease back on the bolt to have the spent case plop conveniently onto your shooting table. When hunting, a swift pull to the rear will send cases flying out of the action. That flexibility is something that you can’t normally get from the more typical plunger-style ejectors. Removing the bolt is also easy, thanks to a large bolt release tab on the left of the receiver that disengages the bolt stop. It’s easier than the Savage dance where you’re pulling the bolt back, pulling the trigger and pushing on the sear release.

The hinged floorplate. . .well, it’s a hinged floorplate. That’s a bit better in my books than a blind magazine, but I still prefer a detachable magazine. In any case, a hinged floorplate makes the bottom of the rifle much more resilient to damage. With this rifle, you do get 5 rounds of 30-06 into the mag, which is more than the typical 4 that you get with detachable mags. It’s also possible to load the chamber with a 6th but it sucks to try with winter gloves on, so I’d opt to just roll with the 5 from the mag and charge the chamber from those 5 when hunting on cold November days.

Because it’s controlled feed with a fixed extractor, you can’t drop extra rounds onto the feedway and expect the rifle to use them. Rounds have to come from the magazine to correctly slide into the extractor and chamber.

The trigger on this particular rifle was a very usable single-stage style that broke at just over 4 lbs. The trigger face is serrated and very grippy; you won’t be slipping off this trigger if you have buck fever.

I’m waiting on my home range to complete construction on the 100 yard range. Will post results once it’s done!

This is a different rifle than a modern, push-feed, value-priced rifle. It uses a more classic action style, hinged floorplate, and a monstrous extractor that is likely overkill for today’s modern ammunition. It’s also 1/2lb heavier than many competing value-priced bolt action rifles, not that a half pound should matter that much. 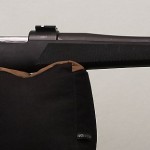 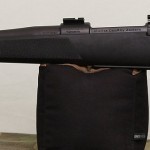 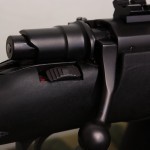 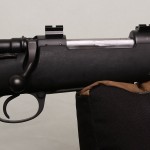 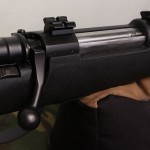 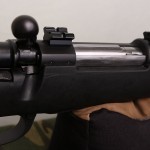 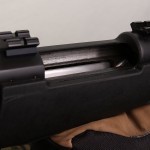 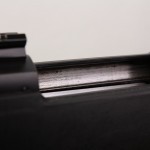 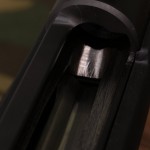 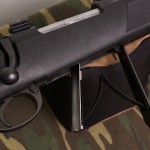 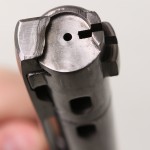 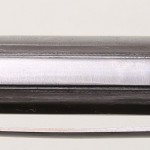 Adriel has been hunting all his life and tries to apply a practical point of views to his reviews. Find the Hunting Gear guy on Facebook or YouTube
View all posts by Adriel →
Canada’s Cheapest AR-15 Muzzle Brakes Compared
AR-180B Review