As we’ve all started our new year, it’s time to look forward and see what’s ahead of us in the Canadian hunting and firearms community. There’s Bill C-42, a good meaning but somewhat low-powered bit of legislation designed to do away with paper ATT’s (but keep them in spirit, attached to RPAL Licensing). It’s also an election year and right now it looks like the Liberal party has the lead in the polls. That should be concerning for gun owners, because the Liberal party has taken jabs at us before. After listening to Slam Fire Radio’s Episode 89, I think the NFA has the right strategy in mind: apply political pressure while we have some leverage.

You can listen to the podcast if you’d like the back story and legal reasoning around it, but I’ll offer up a 2-bite summary: AR-15’s don’t have to be restricted (pending barrel restrictions) and magazine limits could go away TOMORROW by an Order of Council. These 2 pieces of legislation are pretty dumb: there are already AR-15-ish rifles in Canada like the XCR that are non-restricted and the streets aren’t running with blood, and magazine limits are currently guarded steadfastly by 2 cent rivets. Those rivets don’t prevent criminal use because they just drill them out, but they do prevent law-abiding users from cleaning the mags properly and from having fun at the range. And I’d love to hunt coyotes with an AR-15. In fact, even while the AR15 is restricted, I think it’s important that Canadian hunters own one. These are fun-police laws, not laws that keep us safe and these bad laws could be gone asap!

So, you know our government is backwards right? Well, to make a petition really count, it can’t be easy and online. The NFA has started 2 separate petitions, 1 for the AR-15 and 1 for magazine limits. There’s PDF’s and printing involved, because political change is hard, but this is an extremely important time to show to our politicians that we (firearms owners) are an important political force and we have to be recognized at least for our motivation and our votes.

I urge ALL my Canadian readers to sign one of these petitions. Print some and bring them to your monthly gun range meeting, leave some at the range itself (with approval from range management), and encourage local gun shops to have one on hand.

Even if you don’t think people need more than 5 rounds in a magazine or even if you think hunting coyotes with an AR-15 is stupid, stand up and defend others’ rights to do so. This shouldn’t be about what we personally feel is applicable to us, but is instead about making dumb laws go bye-bye. Rivets don’t stop mass murderers and gang-bangers mostly use cheap smuggled pistols from the US. A rising tide lifts all boats: we need not be divisive in how we approach this. Sign the petitions, pretty please with a cherry on top. 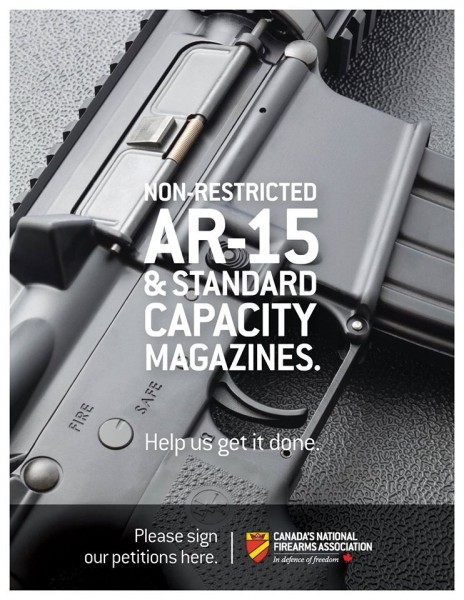 Adriel has been hunting all his life and tries to apply a practical point of views to his reviews. Find the Hunting Gear guy on Facebook or YouTube
View all posts by Adriel →
2014 Wrapup
UTAS UTS-15 Hunting Review