By Matt Capranos on February 14, 2014 in Canadian Hunting Stores 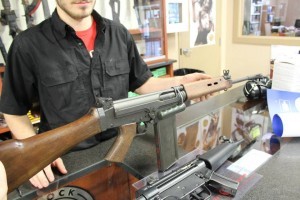 As the word prohibited implies, these are “banned” firearms that cannot be owned by the average Canadian.  While I won’t go into depth of Canadian firearm laws, if I did, this article would be 50,000 words long and would quickly devolve into a rant about how unjust Canadian Gun laws are.

For those who are not familiar with Canadian Gun Laws,  In Canada, we have 4 Classifications of firearms – Prohibited, Restricted, Non-Restricted and Antique. My license grants me the privilege to possess and acquire Restricted and Non-Restricted Firearms. I remember when I first applied for my license, I was naive as to what I could legally own in Canada.  I had visions of purchasing my first AK-47, Dragunov, FN FAL, MP5, and well the list goes on.

Now, if you noticed,  each of the firearms I was planning on purchasing are Prohibited in Canada, they’re banned as named prohibited rifles in Regulations Prescribing Certain Firearms and other Weapons, Components and Parts of Weapons, Accessories, Cartridge Magazines, Ammunition and Projectiles as Prohibited or Restricted (SOR/98-462), under former weapons prohibition order number 13.  As you read this article, you’re starting to think “Matt, this is turning into a rant!”,  I promise to stop ranting and move onto the meat of the article.

In the summer of 2013, I was on a continent wide road trip with my buddy Roland, we decided to take the a month off work and explore as much of Canada and the US as we could. In each new city we stopped, one of the first places we would visit, were the local gun stores. During our journey we were in Calgary, and one of the stores we visited was Calgary Shooting Centre.

Like each store we stopped in, we would walk the aisles, see what wares were for sale, and in the stores in Canada, purchase a few accessories (magazines, ammo, pouches, etc). I was ready to walk out of Calgary Shooting Centre, but then a rack of rifles caught my eye.  Firearms for rent, Prohibited Rifles for rent!

I was dumbfounded, how can there be prohibited rifles available for use? I nervously approached the counter and ask, how is this legal? As it was explained, since the CSC is a store, the firearms are registered to the store and since they also have an indoor range, they’re able to walk the firearms from the counter to the range.  Now to be honest, in all the excitement of being able to shoot my first prohibited firearm I wasn’t able to catch the entire conversation, so some of the finer details were missed.

In  order to rent the firearm, you have to pay for a day pass at the range, pay for the rental of the firearm as well as purchase the ammunition you will be using.  Costs can quickly add up, but for me the extremely rare opportunity to hold, let alone shoot guns that I’ve dreamed of owning, costs for the day meant nothing.

Some of the firearms that you can rent

Calgary Shooting Centre, offers visitors a wide selection of guns to rent, including Non-Restricted, Restricted and Prohibited.  On this day, I was only going to rent Prohibited rifles. Here’s a few pics of what can be rented for a day at the range. 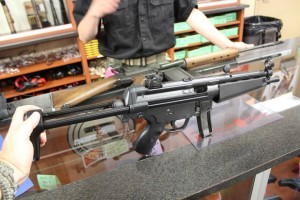 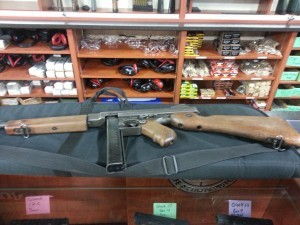 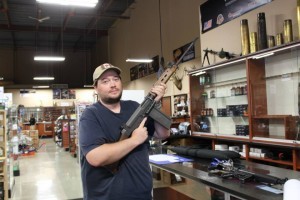 There were several other rifles that could be rented, I was hoping to try out the AK-47 they had, but it wasn’t available for rent. It was firing 3 round bursts, so it had to be sent out for repairs.  The prohibited rifles available for rent are semi-automatic only, they’re not capable of full auto or burst fire. If you look closely at the magazines of each of the rifles, you’ll notice one thing is missing. If you weren’t able to see it, it’s the 5 cent rivet that must be  added to magazines designed for centre fire semi-auto firearms to limit their capacity to only 5 rounds. In Canada, magazines designed for semi-auto centre fire rifles must be pinned to 5 rounds.  For a few brief hours, a visitor to Calgary Shooting Centre, will be able to rent rifles that aren’t normally available to the average Canadian, but also be able to load up standard Capacity magazines!

At the shooting port

After signing the necessary waivers, paying for the rental of the firearms and ammunition, and I highly recommend that you purchase a few extra boxes of bullets, you can quickly squeeze off rounds in all the excitement. You will then be escorted into the lounge of the range, proper range etiquette is explained, as well as safe handling, loading of the firearms that you will be using. Then it’s into the range to set up your targets and punch holes in paper. 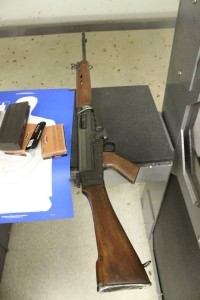 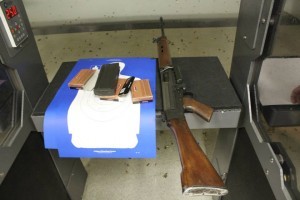 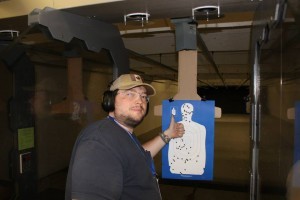 For my time at the range, I rented a Thompson SMG, British L1A1 FN FAL, HK MP5. Pictures of the day at the range don’t do these quality shooting irons justice! Below are some videos of my time at Calgary Shooting Centre.

Now if the Gentleman at Calgary Shooting Centre are watching and saw my slapping of the charging handle on the MP5, it’s only after doing some reading, I realized that it could cause problems for locking the charging handle, and I apologize.

What felt like minutes at the range, was actually hours of shooting. Hundreds of rounds were sent down range, and it was a fantastic, but heart breaking experience. I was heart broken to give the rifles back knowing full well, that I can’t legally own them, but for a brief period of time, those guns were mine and I loved every second of it!

The staff at Calgary Shooting Centre are a fantastic bunch, they’re truly firearms enthusiasts and they made my day at the range a great one. If you live in the area you should definitely drop in, and if you find yourself visiting Calgary be sure to pay them a visit.

Matt Capranos is an IT professional, that lives and works in the Greater Toronto Area. If I'm not at office, I'm at the range, and if I'm not a the range, I'm out in the back country.
View all posts by Matt Capranos →
Bushnell Trophy XLT 1.75-4x32mm Review
Dominion Arms DA 556 on sale