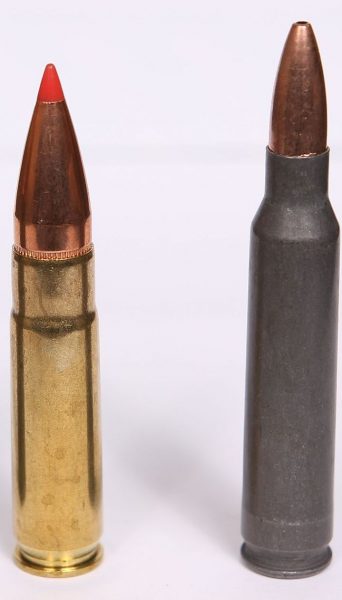 The 300 Blackout, sometimes called the 300 AAC Blackout and somewhat similar to the 300 Whisper®, is what happens when you want an easy 30 caliber conversion for your AR-15. Delivering similar ballistic performance to the 7.62×39, but using a slightly lighter bullet, the 300 Blackout alleviates some hunter’s concerns around bullet mass on game AND makes for a handy suppressed round in an AR-15. It’s easy to convert AR-15’s to and easy to form cases if you’re into reloading. Let’s dive into the 300 Blackout as it performs against the .223 or 5.56×45 round.

Within the Armalite family, there’s the AR-10 in .308 and the later AR-15 in 223/5.56. The AR-10 delivers a lot more power but it’s heavier, gives up magazine capacity, isn’t nearly as common or standardized as the AR-15 platform, and the case capacity is a bit of a waste if you want to run subsonic rounds. So what about a .30 in the AR-15? Some manufacturers offer AR-15’s that run 7.62×39, but that cartridge isn’t the best for the AR-15. The case head is wide enough that you give up quite a bit of metal on bolt lugs after hogging out the bolt head. And then there’s the case taper: which enables great semi automatic reliability but doesn’t work well with the straight magwell and magazines of the AR15. If only we could get 7.62×39 performance in an AR-15…

The 300 Blackout was designed with a few things in mind:

For a civilian shooter, getting into 300 Blackout when you already have an AR-15 is pretty easy: you can buy a dedicated upper to have some flexibility, or switch to a 300 Blackout barrel for a permanent mod and you’re done.

It’s important to separate the 110 grain supersonic round vs the 200+ grain subsonic rounds due to their very different ballistic profiles.

Effectively, it’s a 100 yard cartridge for hunting deer. Very similar to ballistics on the 7.62×39, but lagging in power at 100-150 yards. It generates a bit more energy at the muzzle than 223 and uses sane speeds, so I think it’d be a better close range deer cartridge than the 223.

Wow, so little drop in velocity, but I guess that’s what happens when it’s poking along so slowly that wind resistance is minimal. The tougher part to account for on these heavier bullets is the rainbow trajectory. Making an accurate hit at 200 yards with a subsonic round is a bit of fantasy, because you’re looking at 30+ inches of drop even if you sighted at 100 yards. It’s also far lower in energy than I’m comfortable using on a deer. For boar at less than 100 yards, it’d work a treat and they wouldn’t know what hit them if you ran the subsonic rounds with a suppressor.

While the 223 crosses the 10″ down mark at a barely-better 320-340 yards compared with the 275 on the 300 Blackout, it stays much flatter further out. By the time we’re at 500 yards, the 300 Blackout is well past 90″ down compared with a 223 at around 50″, or about half the drop. That makes getting hits on man sized targets with the 223 at 500 yards fairly easy with a good rest, but considerably more frustrating with the 300 Blackout, especially if you have errors in your ranging. The high speed and short time to target also helps the 223 in wind drift, where it beats the 300 Blackout by around 50%-80% depending on range. Not such a big deal when you’re comparing a 1″ drift to a 1.6″ drift at 100 yards in a 10 mph crosswind, but considerably better at 500 yards where the 223 will drift around 30″ compared with the Blackout at 50″.

So, the 223 is much better ballistically, but given that the 300 Blackout is using a bullet over twice the weight with the same case, you were expecting that anyways, right? 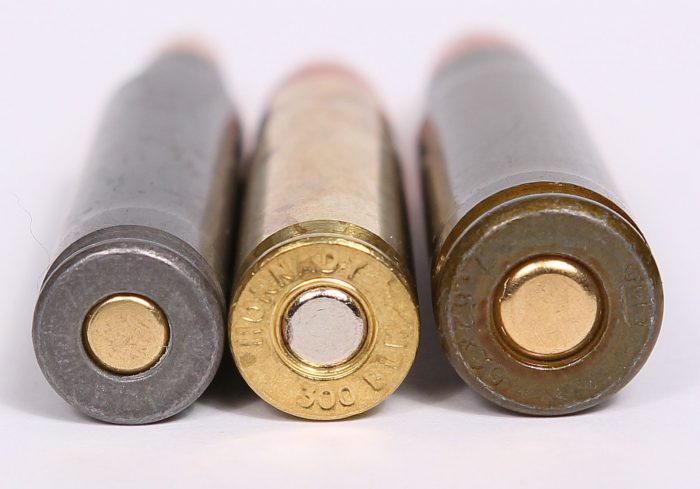 223 is cheaper than 300 Blackout. Since one is a NATO standard round and has been for decades, while the other is a new (2011 SAAMI acceptance) cartridge, this is to be expected. 300 Blackout is $1+ per round in the US and around $1.50-$2 in Canada. Now, if you’re well setup as a reloader and don’t mind forming cases, you should look into reforming .223 into 300 Blackout. It’s as simple as rough trimming the case to length, full length sizing with case wax/lube, and then final trimming. Tons of great 30 caliber projectiles are out there that’ll work great in the 300, so you don’t have to buy expensive factory ammunition if that’s all that’s available near you. Due to the 300 Blackout’s relatively slow speeds, you don’t need super duper premium bullets to do the job on deer and other game animals. Plain cup and core bullets will likely do the job and not lose a significant portion of weight.

Compared with 223, you can get the excellent Federal Gold Medal Match at the same price, or buy domestic ball ammo for right around $0.50 per round, or go to steel cased Russian fodder for $0.30-ish. When it comes to hunting ammo, I really think 223 benefits from running premium bullets since you stand a real chance of impacting a game animal at very high velocities if you take a close shot. If hunting deer with 223 was legal in my area (it’s not), I’d be running heavier, harder bullets to reduce the chance of splashing out energy on impact with a hard bone. For me, that’d mean a slightly higher cost on 223 hunting ammo compared with reloaded 300 Blackout rounds, but at the volume of ammo needed for hunting deer yearly, who cares? So for practice ammo, the 223 is in the clear lead, while it’s essentially the same on hunting ammo. If you reload, hunting ammo is similar in cost for both rounds.

With the 200 grain subsonic, recoil on the 300 Blackout is just barely more than 223 if you have same-weight rifles. In the 110-130 grain supersonic rounds, it’s nearly 50% more. That’s still not a heck of a lot to start with and it helps make this round a great recoil-sensitive, range-limited rifle round. For just a little bit more recoil though, the 243 maintains deer-relevant energy much further than both the 300 Blackout and 223. If you’re up for more recoil, the 308 offers greater ballistic energy at range.

Use Cases for 300 Blackout

So now that we’ve gone over lots of details between the two rounds, let’s imagine up some unique use cases where 300 Blackout would be a better choice than 223:

The primary issue out there seems to be around getting enough gas to actuate the AR-15 action. Running a suppressor helps a heck of a lot but without one, running even the 110’s in a regular AR-15 action may require using a carbine length gas system, a non-heavy buffer, or enlarged gas hole to keep things reliable.

Another major issue is factory ammo availability and cost. It’s not too expensive at major retailers, but local stores may not have any or it might be super expensive.

Since the round is so slow and bullets are very light for caliber, the ballistic coefficient and ballistics profiles in general are not very hot. There’s something interesting about a round that loses such little speed going from 0-200 yards, but the damn thing is poking along so slowly that it’s barely upsetting the air as it scoots by at a leisurely pace. The negative side to that low speed is the rainbow arc to hit your target at longer ranges.

I’m going to be a bit of an a-hole and throw one more out there: subsonic vs supersonic. You can’t really fall in love with the ability to run subsonic rounds if you want to use it for hunting or 100+ yards shooting, because the supersonic rounds are better suited for that purpose and they’ll hit a completely different POI than subsonic rounds. They might as well be miles apart. If you still love both types and want to make it work, a secondary sighting system like a red dot on a 45 degree offset mount would let you zero for one round while your top-mount sighting system could zero for the other type. Boom; flexibility achieved.

The 300 Blackout is a specialty round, delivering similar ballistics to the 7.62×39. It is most useful at short ranges but there are better cartridges for short range. Where 300 Blackout really shines is in a suppressed AR-15. It is easily convertible and uses the same magazines. So if you are looking for a really quiet time with an AR15 or looking for a hunting rifle with light recoil, consider the 300 Blackout. Otherwise, the 223 is better 😉

Adriel has been hunting all his life and tries to apply a practical point of views to his reviews. Find the Hunting Gear guy on Facebook or YouTube
View all posts by Adriel →
Spartan Precision Javelin Super-Lite Bipod Review
Pardus SS Review