Looking at getting a rifle in a different caliber, or looking at getting your first rifle? The array and names of the cartridges can be confusing. Is a 308 bigger than a 30 “ought six”? Is a 7mm bigger than a 9mm pistol? The makers of these different cartridges sure haven’t made it easy to compare them. Even if you know them, it can be difficult to know which is flatter shooting or harder hitting or harder recoiling. So, I decided to put together a quick little chart and some quick rules of thumb to get you by.

Calibers for Hunting Deer and Elk

I’m using a few different inputs, but really the numbers I’m going to be comparing relate to:

Keep in mind that there is no free lunch. With increased range and/or energy, you increase recoil. And when you look at the MPBR’s of these cartridges, you’ll quickly realize that the difference in “flatness” is incredibly small. With knowledge of how far you want to take game at, you can use this table to decide which rifle gives you the distance you need while minimizing recoil. One smaller variable I’m not measuring here is barrel erosion. Suffice to say, faster cartridges will burn out a barrel faster than some of the slower ones. If you do a standard amount of hunting, you’ll still get lots of life out of even the fastest standard hunting cartridges.

The 243 is based on the 308 Winchester, but is necked down to .243 caliber. That makes for a much lighter and somewhat faster bullet. Most importantly, it cuts the recoil down considerably. A 243 with 100 grain bullets is the most popular choice for youth hunters and lady hunters who are just getting into the sport. Make no mistake, even with its diminutive recoil, the 243 is devastating to deer in the most common ranges: 50-250 yards. That makes it a practical choice for the majority of deer hunts, and shot for shot, will do the exact same thing that any of these other cartridges will. However, on any bigger animals, the 243 is just not putting out enough oomph to recommend. So no Elk or Moose on the menu. The 243 can be sighted in for an MPBR of 290 yards, which is pretty much the farthest you’ll want to shoot a deer at anyways with this cartridge. Because the 243 is based on the 308, it fits into short actions and therefore can be found in rifles that are slightly lighter than regular length actions.

The 25-06 is a bit of a specialist and I wasn’t quite sure if I should have included it in this comparison. You see, the 25-06 is built for killing deer with a flat shooting, non-magnum charge. Based on the 30-06 (that’s what the -06 part is supposed to imply), the 25-06 is the second fastest cartridge listed here, and it does it with a small, 100 grain bullet. That small bullet translates into low recoil, yet a far MPBR of 310 yards, also coming in second. The only thing that worries me about the 25-06 is that hitting a deer at close range would mean speeds well over 3000 fps. A conventional bullet will definitely make more of a mess than necessary at that speed and if it were to impact a hard bone such as the thigh or hip, it may splatter instead of penetrate. The 480 yard limit for deer sized game seems small compared to the other cartridges in this article, but keep in mind that 480 yards is an extremely long distance. Most hunters have never shot a deer past 400 yards.

Take that case from the 25-06, and imagine it with a slightly wider bullet. From 25 caliber, to .277. From 100 grain bullets, to 130 grains. That extra bullet weight greatly increases recoil from the low range to the mid-range, reduces speeds, and greatly increases maximum ranges game can be taken at. Now, we could potentially take down deer sized game up to 600 yards away, but we’ve done it at a pretty great increase to recoil. Personally, I think the 270 as well as the 7mm-08 offer the perfect blend of power, speed, and low recoil.

The 270 WSM does everything a 270 can do, faster. That same 130 grain bullet is now cooking along at 3300 fps from the muzzle. That cranks our max deer range out to over 700 yards and makes this the flattest shooting cartridge in this comparison. The cost comes in a very slight increase in recoil, much more expensive ammunition (double the cost, usually), and a reduction in magazine capacity in most rifles.

Take all the stats from the 270 in killing distance, cut a bit off the recoil and MPBR, and put it in a short action rifle, and you have the 7mm-08. With the popular 140 grain bullet size, the 7mm-08 carries its weight plenty far enough and does it with pleasantly little recoil. Seeing how it’s the big brother to the light kicking 243, you’d expect that. For deer, the 7mm-08 seems perfectly suited. Along with the 243, the best options for lady hunters.

Our first magnum, the 7mm Remington Magnum puts a whole lot more gunpowder behind a slightly heavier version of the 7mm-08 bullet. The extra power propels the bullet’s deer killing range out to 780 yards, and the Elk/Moose distance to more than 500. But like I said before, there is no such thing as a free lunch. That extra power and range takes the recoil up to 15.7 ft-lbs, above the standard 15 that most men are comfortable with. That introduces the potential of inducing a “flinch” in the shooter from practicing with their hunting rifle, when you start anticipating the sharp kick that’s coming your way. You can combat the recoil by using a heavier rifle or a better buttpad.

By modern standards, the 30-30 is a complete joke. Originally marketed in 1895, it’s the only rimmed cartridge I’ve included here. I chose to include it because it still sees use in short range, fast handling lever action rifles and those rifles are perfectly at home in heavy brush or walking along trails. Accuracy and range wise, it’s the light-weight of this group. Note that even in this ancient has-been, you can still get a meaningful MPBR of 204 yards. Plenty of game is shot short of 200 yards, and if you play to this cartridge’s strengths, it’s still fantastic. If you really love lever action rifles and you want to increase your range, you can always check out Hornady’s LeverEvolution ammo that uses a soft, rubbery tip to give their bullets MUCH better range. 30-30 is also often the cheapest hunting ammo available.

Talking about lever actions, you can also find plenty in the much more powerful 308 Winchester. Browning BLRs and Savage 99’s are both plentiful and both use the faster, harder hitting 308. Aside from levers, the 308 is also a potent amount of power to put into a short action bolt rifle. Kick is medium, distance is decent, and ammunition is inexpensive. The 308 is also spooky accurate and is used by many militaries as a sniping round.

The 30-06 is the go-to cartridge when you can only get 1 rifle and there are going to be lots of different sized critters on the menu. Decent for deer, bear, elk, moose, and all within reasonable distances. Importantly, the 30-06 does all that without going too far past the average limit of 15 ft-lbs of recoil. It’s the last one on the list that’ll be reasonable on recoil.

This is it, the biggest, baddest round that is offered in standard rifles. Typically loaded up with 180 grain bullets, it’s still hauling enough energy to reliably take out a deer at a mighty 860 yards. It’s also fantastic for the long distances that elk are shot at, offering enough oomph to take them at at just over 600 yards. With an MPBR of 295, it’s still flatter than average, and that’s with a heavy bullet. All these capabilities come at a cost: recoil. Remember the 15 ft-lb average we had? The 300 Win mag puts recoils with 20.5 ft-lbs of energy. It’s not completely ridiculous, but it’s more than most people like and a flinch can really ruin your accuracy. And you lose 1 round in most rifles, compared to standard rounds.

Take exactly all the power and recoil from above, and make it available in a short action. Potentially more accurate, and potentially even fewer rounds for your magazine. The lighter, short action rifle 300 WSM might kick a bit harder than a heavier long action 300 win mag. Don’t forget the premium prices on ammunition. Still, if you wanted to hunt elk and wanted a lighter rifle, the 300 WSM will give you a shorter action and lighter rifle than the 300 win mag will.

A Final Note on Killing Power

If you talk to your buddies about what rifle to pick, they might point out one that they’ve seen “kill deer right where they stand”. They’re doing the best with the knowledge they have but on a statistical basis, what they claim doesn’t have a lot of weight. Having a deer drop dead from a shot has everything to do with shot placement, bullet type, and the deer itself. You can of course guarantee a drop with a spine, head, or front shoulder shot, but that has nothing to do with the caliber: a regular heart/lung shot comes with a 50% “drop dead” potential. Think I’m full of it? Check out this study by the South Carolina Department of Natural Resources. Basically, any regular hunting cartridge will do the job well with a safe heart/lung shot. Do your job taking the shot, and your rifle will do its. 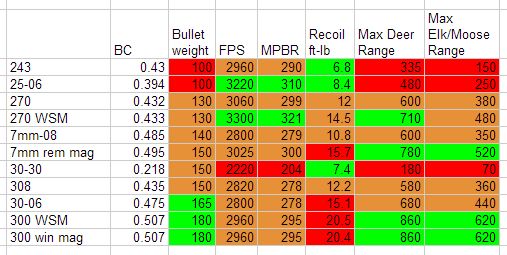 Want to run your own numbers? To generate these charts, I used:

Shortly after posting this article, I was reminded by a reader that I had forgotten the quintessential Canadian hunting cartridge and rifle: 303 british in an SMLE. I actually shot my second deer with a 303 from about 100 yards. There are 2 factory loads that Federal has in their ballistics program: a 150 grain loading, and a 180. Surprisingly, the 150 starts with and maintains energy further out than the 180. It likely has a lot to do with the terrible BC on the 180 grain load, but there’s still not a lot of difference between the two. In the 150 grain loading, the 303 British pokes along at 2690 fps and can take a deer at out to 420 yards. That’s about as far as you should go in the #1 Mk 3 or #4 Mk1 that are so common in Canada. The generous headspacing, short sight radius on the iron sights, and rear locking lug setup on the SMLE is not optimum for accuracy. In any case, the 303 “smelly” still has plenty of range to take a deer at sane ranges and sporterized versions of the rifles are $100-$200 in Canada. If you’re going to buy a new rifle though, for the same 12 ft-lbs of recoil you could get a 270 and greatly increase both your MPBR and killing distance.

Adriel has been hunting all his life and tries to apply a practical point of views to his reviews. Find the Hunting Gear guy on Facebook or YouTube
View all posts by Adriel →
Chippewa Arctic Boots Review
338 Lapua vs 50 BMG