Within the budget bolt action rifle category, the Ruger American is one of the newer designs, near the top price-range in this category, but it also comes with the most features. I think Ruger has done a great job of jamming in a lot of high-end features at a low-ish cost, without making any deal-breaking compromises.

Overall, this rifle is light (this one is 6.12 lbs), the stock is fairly skinny, and it has some good, quick handling traits to it. It almost looks and functions like a cheap version of a Browning X-bolt, and that’s not a bad thing. The Ruger American retails for about $400 in the US and $460 in Canada.

The package rifle that I purchased comes with a much better scope than most package rifles, but also cost quite a bit more. If you do the math using current pricing, it’s a pretty good deal: Ruger American ($449) + 3-9×40 Redfield Revolution ($289) + Rings ($25) = $763, yet this package comes in at $679. If you needed a decent scope anyways, this combo offers a decent discount off the regular price. It’s a lot more expensive that many of the other rifle/scope combos, but it’s using a rifle scope of known quality instead of a no-name model and we know what the scope is capable of: see my review on the 3-9×50 Redfield Revolution. The Redfield 3-9×40 offers a nice, big sight picture, and an excellent warranty. I would have liked to have seen one of the ballistic reticles instead of the 4-Plex, but I really can’t complain too much considering the price.

The action itself is based around a 3 lug bolt, importantly offering a bit more clearance around the scope and less importantly, slightly faster bolt cycling. I wouldn’t say the bolt looks pretty: the bolt on mine showed machine marks pretty easily and the face was clearly marked up by machine tools, but at this price point I think that looks are still second to functionality. I really like how 3 lug bolts and their reduced bolt throw leave more room for my thumb/fingers between the bolt handle and a low mounted scope.

Moving back a bit, there’s a simple cocking indicator at the rear of the bolt with a tang-safety immediately behind it. If you’ve read my other reviews, you know I much prefer tang mounted safeties for their ease of use and control. I find it easier to quietly move a tang safety forward to fire than a side mounted safety without moving my hand too much. Moving the Ruger American’s safety to safe does generate an audible *click*, but it can be carefully eased forward into fire mode fairly quietly. On the left of the receiver is a flush bolt release that presents once the bolt is to the rear, making it quick and easy to pull the bolt out of the action. It’s very easy to use.

I wasn’t sure whether to mention the v-block in the stock section or action section, but I settled on action. The Ruger American doesn’t use a traditional recoil lug for transferring recoil forces to the stock. Instead, it uses “Power Bedding” aluminum v-blocks as both an accuracy-boosting measure (Stocks with V-blocks usually secure actions to stocks better than pillar-bedded stocks, all else being equal), and as the “recoil lugs”. It’s kind of a neat idea and you really feel the V-block compression and firm *stop* when re-installing the action and screwing it back into the stock. I liked that there were only the 2 action screws and no other weird screws needed. 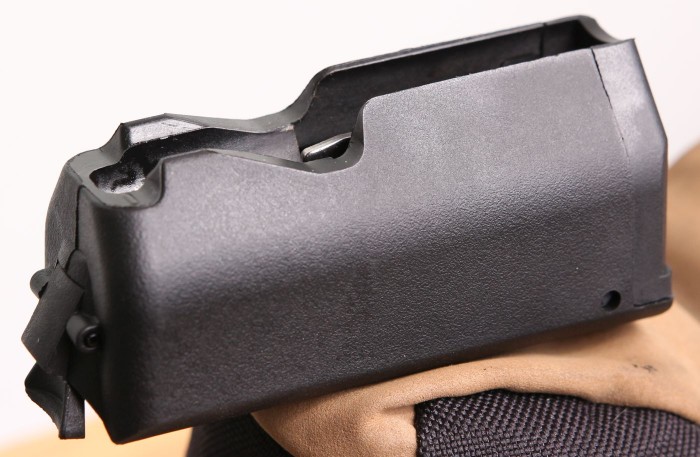 The rotary plastic magazine was fantastic on the Browning X-bolt and it’s fantastic on the Ruger American as well. The plastic is a bit cheaper and hollow feeling compared with the X-bolt, but this rifle is also a lot cheaper. The magazine is super lightweight and slips into the magwell lightning-quick. No thinking about rocking the mag into place, just aim it at the magwell and it’ll go in. Mag-insertion difficulty has been a complaint of mine in the past for other budget bolt action rifle designs.  The mag also keeps a secure hold in the magwell, not rocking back and forth or rattling around. The mag catch on both the mag and the corresponding shelf on the magwell are plastic, but I don’t consider that cause for concern with this design. Rounds can be snapped in from the top like with Savage’s Centerfeed mags. 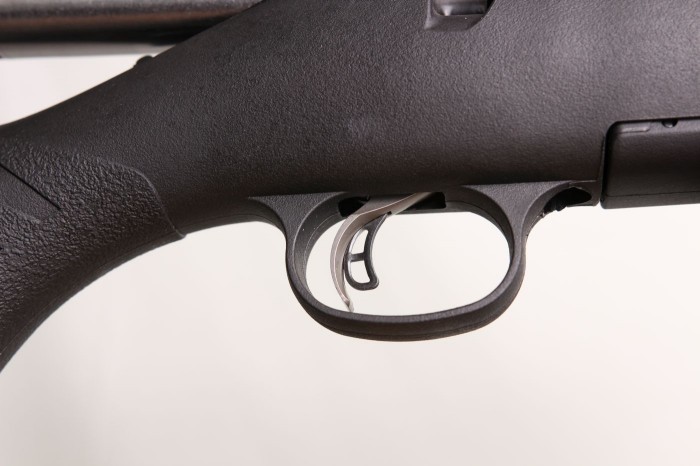 I guess Savage’s patent lawyers didn’t or couldn’t protect the AccuTrigger well enough, because it seems like everyone uses the trigger-lever design now. Unlike the AccuTrigger, the Ruger Marksman trigger doesn’t drop the sear into safe mode if you pull the trigger but not the lever: instead it just doesn’t fire. This is a very small technical advantage because you don’t need to re-cock the rifle or have it in a somewhat strange fire-state. The trigger pull is just like the Savage, Mossberg 4×4 or Remington 783 trigger-lever triggers: short, light, and sweet.

The plastic on the stock is a bit cheap feeling and hollow-sounding, but again, this isn’t a $1000 rifle. The rear of the stock where you place your cheek feels a bit skinny and might hit you a bit when firing, but it does make the rifle feel more compact and quick. The stock has some texture on handling surfaces and though it isn’t fancy looking or feeling, it gets the job done. There were some sharp spots on the forend on the stock on my rifle, but I can’t complain too much. I’d put the butt-pad at “medium” squishy. Not as squishy as a Limbsaver or Remington R3, but a lot more squishy than the pad used on a Savage 200 or Remington 770. The stock comes with sling studs at the front and the rear.

I fought a bit with this rifle trying to get an accurate load. The forend contacted the barrel a bit, so I relieved the barrel channel, but it still gave me the odd flyer. It might just be my rifle, but I couldn’t get much better than 1″ groups.

At $449, this rifle is closer to the $500-$600 rifles than it is the Axis, ATR, or other bargain-basement bolt action rifles, so comparing it to those rifles isn’t incredibly fair. It really should be compared with the Savage 11/111 Trophy Hunter XP, Mossberg 4×4, and Remington 783 within its immediate price bracket or even Browning’s AB3, Weatherby Vanguard Series 2, Remington 700 SPS, or TC Venture at the higher end. That said, I think it still stacks up well for its price point. Ruger did an excellent job of using plastics in the right places where cheap and light were needed, and metal in places where durability and strength were. 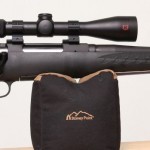 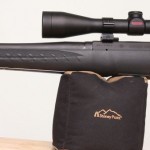 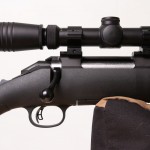 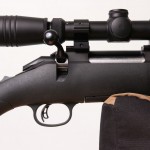 Bolt up and unlocked 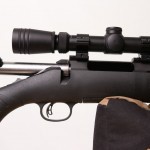 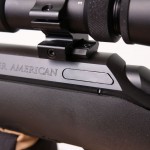 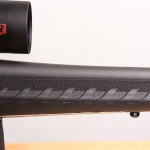 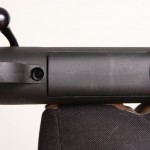 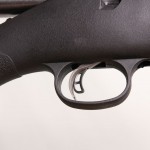 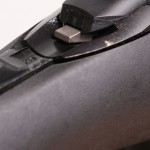 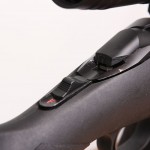 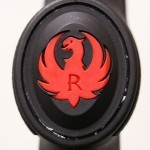 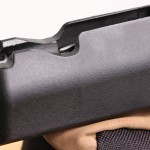 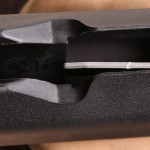 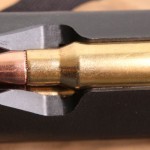 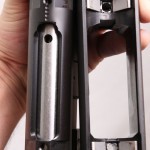 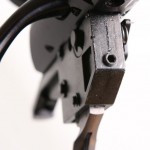 Adriel has been hunting all his life and tries to apply a practical point of views to his reviews. Find the Hunting Gear guy on Facebook or YouTube
View all posts by Adriel →
Remington 770 Review
Dominion Arms Backpacker 12 Gauge Review