OK everyone, we’re being played. Yes, we’re all trading lots of articles that support our particular world view, whether that be FOR gun control or AGAINST gun control. I wanted to write an article that addressed some of the worst logical fallacies and put them forward for everyone to see.

Here are the ones I’ve been seeing on a consistent basis:

1. Including Suicide Numbers as “Gun Violence”

Clearly, we need to ensure that vulnerable young people don’t have easy access to firearms so that they won’t kill themselves for something that seems important to them at the time, but is just a blip in their potential lifetime, but what about older people who are terminally ill or just tired of living? Personally, I think we should have better access to doctor-assisted suicide so that those people can exit life on their own terms, and because much of end of life healthcare seems costly and just delays the inevitable for a very short period of time. That’s just my opinion, because I’m generally pragmatic and believe that people should have more control over their own lives. 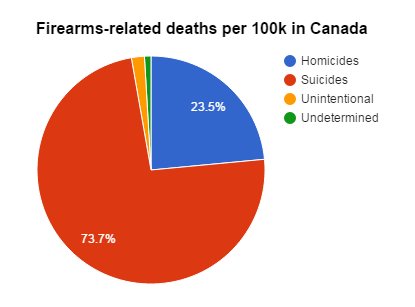 Why is including suicide numbers in “gun violence” statistics misleading? Most of the time, people calling for control are calling for it to prevent homicides or mass killings. Suicides make up for the vast majority of gun deaths, so it’s very misleading to include them and use them in combination with statements about violence.

2. Comparing over large periods of time without comparing against similar countries

I found this one more recently with stats used on Australia. After the Port Arthur shooting in 1996, Australia enacted tough new gun laws. Homicide rates dropped 31.25% in the years since. Great success, right? Nope. The 80’s and 90’s were violent times for many “civilized” countries.

If I believed gun control worked, I’d have expected the biggest drops in the UK, where handguns were completely banned in 1996, and in Australia, which implemented a very restrictive gun ranking system and costly gun buyback. Canada implemented some gun control in 1995 as well, but you wouldn’t know just by looking at the numbers above.

Other variables are so much more important that they mask any impact of gun control laws when you perform simplistic statistical comparisons like this. This type of analysis is outside of most people’s abilities and can’t be done with a simplistic country X vs country Y comparison.

3. Claim Reduction in Gun Violence, Then Ignore Relative Increase in Other Types of Homicides

Trick question: which of these bars looks too good to be true? 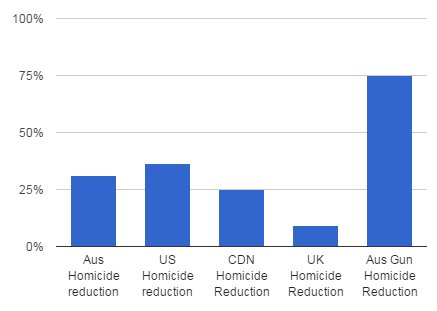 If you said “Australia Gun Homicide Reduction”, you win!

The goal of gun control laws is frequently claimed to reduce homicides, but then measured in reduced “gun homicides”. Seems to make sense, until you ask the obvious, “did criminals start murdering people with other means?”. OF COURSE. After Australia enacted gun control laws, gun control advocates claimed that “gun homicides” in Australia dropped from 2.5 to 1.1/100k. That’s a big reduction, around 75%, but what about our 31.25% number from above? Well, that’s true too. So how do we reconcile 75% with 31%? Murderers started using other tools to the point where the law and its effects look minimal at best. Gun homicide goes down, knives and others go up.

What’d Australia do about that? Well. . . .they’re still working on it. 4. Gun Control as a Weapon Against Women

Just to keep it short: everything in this statement is wrong. Here’s a brutal, point by point takedown if you care. In case you think I’m picking on the NDP, the Liberal’s recently released platform on gun control makes just about as much sense: none. Most of the points they have in their platform involve no change from the current laws, and it shows either a marked lack of awareness on how the current laws work, or it’s deliberately pandering to a supporter base that is ignorant about how current laws work. I’m guessing the latter. Here’s the corresponding beatdown on that platform.

By the numbers, men kill and are killed a LOT more than women. Men make up for 74% of gun homicide victims. If anything, men are the real victims of homicides.

There is still a problem in western societies with men killing their spouses or exes. Within Canada, you can call the RCMP with a spousal safety concern and I have no doubt in my mind that they treat those calls seriously and act quickly. And just a quick FYI: Bill C-42, the very bill that Mulcair claimed to harm women’s safety rights, made it more difficult for anyone with domestic violence in their record to get a PAL and acquire firearms.

We surveyed scientists and they said, “Having a gun in your house increases the chances that you’ll die by a gun.” Statements like this are absolutely, 100% true. This seems like a dangerous point, but it really isn’t when you consider the risk factors. You know what’s really dangerous? Swimming pools. Those fuckers are 100 times more likely to kill your kids than having a gun in the house. If we cared about fact-based policy, we ought to ban swimming pools. You know, for the children. We should also look into cheerleading, it’s dangerous as well.

Just to be clear, this isn’t the researchers fault, asking if something increases a risk is a dumb question. “Owning a bicycle increases the odds of bicycle-related injuries and death.” Dumb statement, right? True, but still  dumb because it doesn’t factor much for relative risk.

Interested in reading more, mostly unbiased Canadian Gun Stats? Check out this article I wrote on the subject last year.

Adriel has been hunting all his life and tries to apply a practical point of views to his reviews. Find the Hunting Gear guy on Facebook or YouTube
View all posts by Adriel →
I’m on Slam Fire Radio!
Reloading for 6.5 Creedmoor