Here in Canada, there are a few firearms rights organizations and they each have their own approach on how to deal with turning the tide. The CCFR focuses on the public facing side of things and they do some really interesting things that none of the other gun orgs are into. Because they’re new, they also took a really digital-heavy approach to their work.

As a digital marketing guy, I have a strong preference for doing more digital. It’s really the way the world is going and it’s a lot better for tracking what’s working. The CCFR are all-in on digital. They’ve done online voting, which is so convenient. They organize a lot using Facebook, which again, is convenient for most people. Heck, they go live with Facebook often to provide updates; heck, they live streamed their AGM. They also produce YouTube videos. The nice thing about going digital and using the platforms out there is that their updates are fast and furious. Updates don’t wait for a quarterly newsletter, they go out quick.

Rod’s videos were the best firearms rights videos before the CCFR started. With the resources of the CCFR behind him, he’s really done some great videos on posted them on a fact-based website called GunDebate.ca. They’re bite sized, they’re super friendly, and they’re very practical and approachable. They’re the best pro-firearms videos done in Canada and I feel like my membership dues are well used producing them.

One thing I’ve noticed about the CCFR is that they have an active and prolific field officer program. Although I don’t help as much as I’d like to, I’m a field officer with the CCFR, as are many others. These field officers help at gun shows and other events.

The other orgs do insurance as well, but the CCFR also offers legal advice and legal defense insurance which are kind of interesting.

More Active in the Media

Follow the CCFR and other orgs online and you’ll quickly see that the CCFR is very active. They’re on the radio frequently, podcasts, starting a TV show, etc. Not only that, but Tracey and Rod are super cool and collected on air. They’re not embarrassing extremists, they’re super logical and they make all the right points on air. Listening to them side by side with the opposition like Wendy Cukier is night and day in approach, logic, and rational debate.

I think you become a member with the CCFR for a reason: you want more public support for our hobby so that we aren’t constantly being attacked and having our freedoms taken. Their strategy of influencing more regular people with broad-appeal media is a good one. You should become a member of the CCFR today. 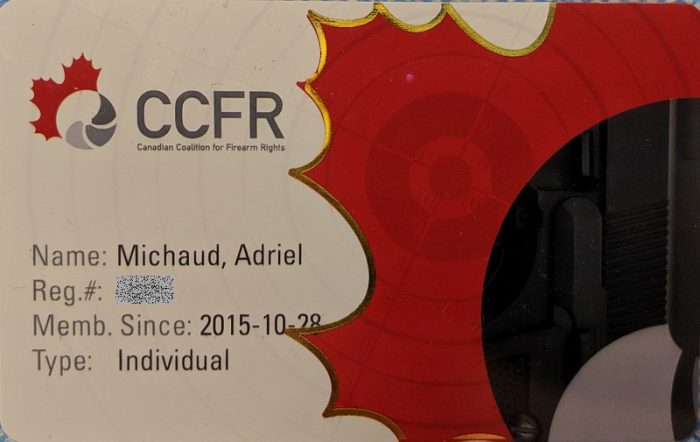 Adriel has been hunting all his life and tries to apply a practical point of views to his reviews. Find the Hunting Gear guy on Facebook or YouTube
View all posts by Adriel →
Kel-Tec KSG Review
ETS CAM Mag Loader Review