By Adriel on August 2, 2015 in Equipment Reviews

When it comes to hearing protection at the range, there are 3 major choices: earplugs, headset or muffs, and powered muffs. Earplugs generally offer the greatest noise reduction, followed by passive headsets, and finally arriving at powered muffs, although some higher end units offer decent NRR. Earplugs usually good for 32 dB NRR, passive earmuffs are good for 27, these are NRR 23. Aside from the decibel reduction rating, there’s the matter of convenience. Earplugs take about a minute to insert and expand to your ear canal and you generally don’t want to take them out and put them back in a bunch of times because you can get some crud accumulated on them that’ll eventually end up back in your ear. Passive earmuffs are much more convenient in that they’re easy to take off during lulls in the shooting. Unfortunately, lots of the cheaper ear muffs out there are bulky to put in your shooting bag or interfere with a good cheek rest, especially when skeet shooting. Electronic or powered ear muffs amplify noises around you in between shooting, and silence the speakers during intense sound such as when shooting. One thing you want to be sure of is that your ear muffs will not interfere with your cheek rest. Try them on if you can, or look for “low profile” ear muffs that are skinnier or angle down towards the bottom to give more room. Some of the cheaper powered headsets may only offer 1 microphone. Look for the stereo headsets, because then you can locate who is talking to you or where sound is coming from a lot easier. Beyond that comes portability, adjustability and quality of craftsmanship. This set goes for around $50, which is cheap for electronic muffs.

The Caldwell e-max low profile power muffs that I purchased are on the lower end of the price range, but offers some convenient features. It’s a true stereo headset, with 2 microphones and a convenient 1 knob operation to start and change volume. You can’t really amplify sounds too much more than they’d sound without the headset on, so these wouldn’t be too great to wear hunting. Once folded out, the headset can be adjusted for fit using the wire guides that go down to the ear cups. It’s not a fantastic system, but it does the trick. I don’t think that the adjustment system would take any abuse at all, but that’s the price you pay for a folding headset that’s a bit more inexpensive. Another convenient feature they’ve added onto this headset is the capability to plug in a separate sound source like an iPod or music player. I didn’t really get this feature when I was in the store, but the idea of listening to some tunes while you wait for a barrel to cool is kinda neat. And thankfully, the microphones are still live when you’re using the headphone jack, so you can listen to music AND still have a conversation with the people around you.

In terms of use, the headset is fairly dummy proof. The battery panel is really easy to access on the left side panel and loads with 2 AAA batteries. The single knob on/off/volume is as easy to use as it can get, and a red LED on the right glows when the headset is on. That’s useful, because some of the earmuffs I saw didn’t have any lighted indication that they were on, so you could throw them into your shooting bag without noticing that they were still on.

If you’re finding yourself saying “WHAT?” at the shooting range a lot, a powered muff headset can help out with those conversations and is a logical step up for most dedicated shooters and hunters. That said, I leave them at home most of the time. They don’t block enough noise, so I usually take high quality earplugs instead. 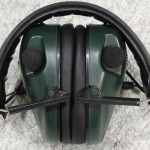 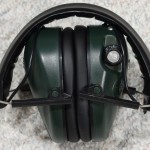 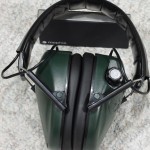 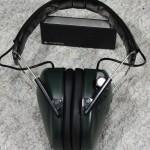 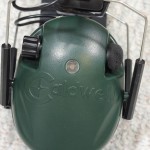 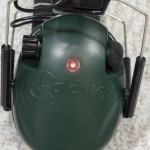 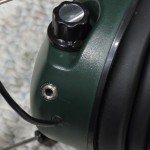 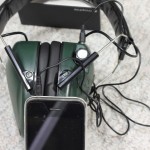 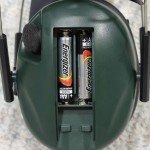