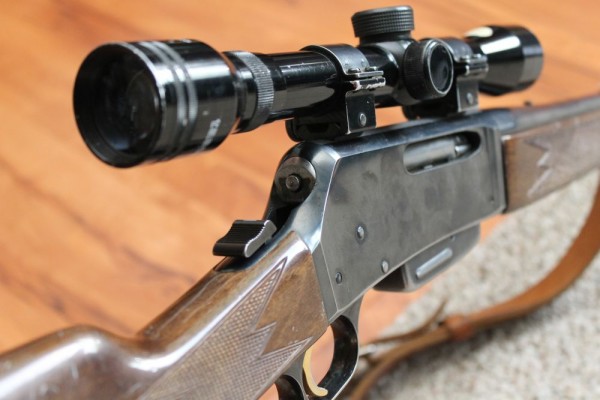 The Browing BLR enjoys a great following in some circles. On paper, it’s clearly the most advanced lever action rifle on the market. The rack based operates more smoothly than a typical Win 94, and the bolt locks up solid enough to fire powerful cartridges. The detachable magazine is faster to load than a tube, and it also enables further flying pointed bullets vs the flat or hollow point ones required by tube magazine lever action rifles. The rifle is also easily scoped, something more difficult with a traditional top eject lever action. The Browing BLR combines all the great handling and fast firing of a lever, but reduces most of the negatives that usually come with one. At over $1200 new in Canada, they’re a bit pricey, but there’s lots on the used market as well.

Many of the Win94’s I’ve handled have been pitted and corroded. Some of that is the fault of the hard use they endure, while some of it is because of poor finishing and the resulting underprotected metal. Brownings are more expensive than most standard factory rifles, but you do usually get better fit and finish. The BLR is no exception.

One thing that’s kept me away from semi-autos for hunting is their inherent trade-offs: it’s impossible to have a live cartridge in the chamber and the bolt open, so you have to have a live cartridge in the chamber with the safety on. That’s the only option (unless you think you can rack the slide back and gently guide it forward in complete silence) I much prefer a bolt action rifle slightly open or a lever action rifle with the lever slightly ajar. It make for a safer carry and is much easier for beginners to understand whether they’re loaded or not. Some rifles with hammers have the hammer resting on the firing pin when the hammer is down. That makes them poor choices for a third safe carry option: round in chamber, bolt closed, and hammer down or half. The BLR does offer a half cock that I’ve used. It’s almost completely silent to take it from half to full cock. It’s also safer than relying on a safety, because the probability that you’re going to accidentally both fully cock the hammer and jarr the trigger is low. Anyway, where am I going with all of this? The BLR offers firing rates that are much faster than a bolt action, while giving more selection and more beginner friendly carrying options than a semi auto.

Hunting with the BLR

The BLR is, in my opinion, one of the best short/medium range hunting rifles made. You can get more accuracy with a bolt action, and you can get a faster shooting rifle with a semi-auto, but the BLR offers a great combination of both. It’s also very pointable, and although I’ve got the somewhat uncomfortable straight stock, the newer version should be more comfortable on the wrist. The relatively short barrel and compact weight means that it swings quickly. The sling point on the forend is as far forward as possible and makes it so that the rile does not move when slung. That’s handy if you have to hike a few km’s back and forth from your hunting spot. The magazine slides into place with minimal fuss and does not make a lot of racket when moved. Now, compared to traditional lever action rifles, the BLR has 1 big thing going for it: standard cartridges. Standard Win 308 is a favorite caliber and offers 400 yard power and trajectory, which you’re not going to get from your 30-30. Indeed, the first deer I ever shot was with the very rifle pictured below, at 350 yards, resting on a fencepost. 308 offers enough power to get the job done without the recoil and noise that newer magnums come with and is a great companion for this rifle. Really, 400 yards should be about maximum for this rifle, as repeatable accuracy is not as good as a typical bolt action rifle. Most owners report groups ranging from 1-4 MOA. If you fall into the middle of that range, then 400 yard shots are pushing the limits of taking a deer humanely. My personal belief is that this rifle, combined with a 4, 6, or 3-9 power scope offers easy shots on deer up to 400 yards in a great little package. The detachable mag is also clearly better than a tube. The tubes move weight further down the barrel, and are a pain in the ass to load and then unload. It takes all of 2 seconds to load or unload the BLR, compared to 20 with a lever assuming you’re carefully sending the rounds into your hand and not just flinging the cartridges all over the floor.

The biggest downside to this rifle is the complexity of the action. You can’t really see it when using the BLR, but there are a ton of small parts in the action. While you may be able to take it apart, putting it back together is a whole other story. Suffice to say, it’s tricky. If you were to drop this rifle in the mud or sand with the action open, you might be stuck back at the hunting cabin for an afternoon, cleaning and then Googling how to put the dang thing back together. With a bolt action, you’d be done in 2 minutes.
The second downside is the accuracy. I hear all sorts of stories online from people who say they get 1 MOA or less from their rifles, but when they show up to the range, “things aren’t quite right” or “I pulled that shot” or “I need better sandbags”. A bolt action rifle is stronger, more simple, and easier to get accuracy from, so if you want to shoot in the 400-600 yard range, a bolt action is a better choice than a BLR. The accuracy isn’t bad, but it’s simply not a long range platform.

The BLR comes in a lot of different calibers, as well as a premium White Gold line.

Where you hunt, how far are your shots? I’m out west so if I want, I might run up against that 600 yard shot. But I know when I’m going to need those vs my 100 yard blind or bush shot and those 100-200 yard shots come up a lot! In those instances, a handy lever comes up quickly and is reloaded in the blink of an eye. If you already have your “deer laser” big magnum bolt action rifle that could take the eye out of a gnat at 680 yards, a BLR might be a handy second gun to take along for those wilderness treks through the bush. In your treks, you might find yourself liking the BLR as your close range deer blaster. I know I do.

The BLR pictured below is my fathers and has seen a lot of hunting from him, myself, and my brothers. Topped off with an old Tasco 4X fixed scope, it has caused a lot of deer go down in its years. 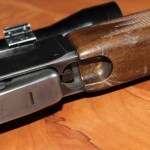 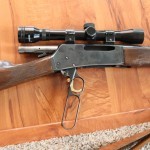 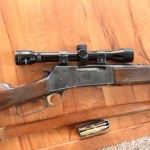 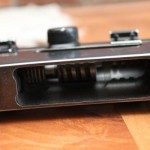 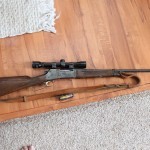 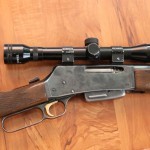 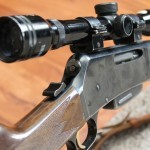